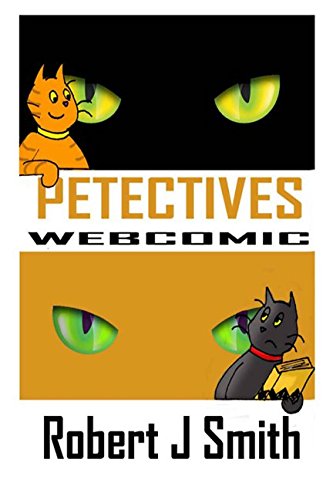 USUALLY THE PETECTIVES ARE DRAWN TO MYSTERY. THIS TIME THEY’RE JUST DRAWN. Yoshi and Gatsby star in their first comic strip adventure! Can two wiseacre cats recover a stolen stamp and put an end to a canine organized crime organization? Ever wonder what your cats are doing when you’re not around? Most likely they’re just sleeping but housecats Yoshi and Gatsby also manage to solve a few crimes in between naps. To combat the boredom of being pets, these two conduct private investigations for their fellow animals. Gatsby’s a smart-mouthed orange, stripey cat who loves going outdoors, talking to witnesses, investigating leads and putting his neck on the line in the pursuit of justice. Yoshi’s a witty and wise black cat who won’t step a paw outside of his house but who can process the information that Gatsby brings him into solutions for even the trickiest mysteries. From shutting down dogfighting operations to stopping attempted peticide, these guys handle it all and do it with humor and style. If you’re a housepet and you have a problem, call the Petectives!